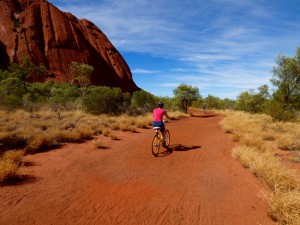 This morning we rode bikes around the Rock.

Uluru doesn’t quite seem real. From a distance it’s perfectly sharp against the backdrop of a huge blue sky; so much so that it appears to have been green-screened into place. Then close up it looks like it’s made of metal instead of rock, the rusty-red is flaking off and looks deeply and metallically solid. What makes it abundantly clear though that this is no movie-set is the flies. They are pervasive, intrusive, and bloody annoying.

Thanks to the flies we were wearing flynets while riding, something I’d never tried before. Cal persevered with his the whole way around, but the rest of us decided that motion seemed to leave the flies behind and the nets were making a hot day even hotter.

Riding bikes around the base of the Rock is a relatively new experience. You pick up the bikes at the Cultural Centre and then set out. While the ride was great, the logistics left a bit to be desired. Dec’s bike was really too small for him, they were all pretty junky and, in spite of booking, we had to wait half-an-hour before they were available (which is significant as the day gets seriously hotter very quickly as you approach noon).

The ride is about 15km all up but it’s harder than that sounds because a fair bit of it is on very soft sand and the bikes aren’t that great. It is all perfectly flat, though, and it’s very, very beautiful. The most beautiful bits are, sort of unsurprisingly, the most sacred to the traditional owners and so can’t be photographed. Being up close to the Rock gives you a proper sense of its scale, but also how significant it was to the Aboriginal people: Partly because it’s size and weathered nooks and crannies meant it was full of stories and significance, and partly because it creates and captures water. There’s a couple of accessible rock-art spots amongst the numerous caves and several remarkably peaceful spots, especially by the waterholes.

The waterholes around the Rock were pretty much dry right now. But the pool back at the Resort provided some lovely cool water. Declan spent an age swimming back and forth watched over by Jennifer and me poolside with a long drink. There’s something quite perfect about sitting back by the pool after a hot day’s exercise.