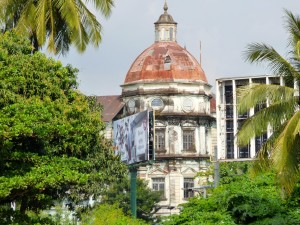 The British built Yangon to be the capital of colonial Burma. It is built around a grid system addressing the river, which makes navigation pretty simple. By the early 20th century, Yangon had public services and infrastructure on par with London. Now it’s a city of deeply faded elegance with old buildings showing gaping windows and plants growing from facades. The river is still the heart of the city, albeit a pretty seedy one.

The river is a muddy brown stretch with a working port sitting firmly upon it. It’s filled with rubbish and slops thickly against its banks. A ferry service runs from bank to bank, supplemented by narrow fishing boats carrying passengers when not actually fishing.

We caught the ferry over to Dala and, really, it was a brilliant way to see a slice of real Yangon life. The ferry is a big, relatively modern boat jammed full of local people. Some, like us, seemed to be just along for the ride rather than trying to get to somewhere. Others were clearly on their way to markets or jobs. For others still, the ferry itself was their market.

There was pineapple available for sale, displayed on the head of the salesperson, chopped and seasoned on the spot. Wicker baskets were full of little speckled boiled eggs. People were selling newspapers, trinkets, lottery-tickets, and cigarettes, each shouting out the attractions of their wares. Other people just seemed to be shouting to add their voice to the general cacophony but were clearly trying to sell something less tangible.  After a while the noise, and smell, was overpowering and oppressive even on the open river.

At the dock the passengers flooded off, only to be replaced by another crush of humanity. The dockside itself was a riot of people selling fruit, riders sitting on their bicycle-taxis waiting for fares, and others clearly just looking for the main chance. We had a few people strike up conversations and start to give us advice on tours they could arrange.

People were smoking thick cheroots, or chewing betel nuts and then, relatively discretely, spitting into little plastic bags. Sometimes the spitting was just straight on to the street which explained the red splotches we’d been seeing. As we left the ferry there was a rivulet of red which at first I took for an unusually prolific betel nut spit, but when tracked back it led to a bicycle crowded with chickens all bound together by their feet and hanging listlessly in the heat. The occasional twitch of their heads showed them still to be alive, although one was uglily bleeding out onto the dock.

A lot of Yangon streets seem to specialise in one thing. Walking yesterday we’d come across the computer street and the printing district. Today on the way back we walked through the bookseller area with shops and pavements all lined with luridly-covered books. The literacy rate in Myanmar is very high and you’ll often see people sitting cross-legged on the curbside reading little books.

This afternoon the weather turned blustery and grey; although it remained warm, and we spent a very pleasant afternoon lazing by the pool and doing a bit of reading of our own.

Plants on a building.

Chickens on the dock.

Smoking on the river.

Pineapple on the Yangon ferry.

Monk on the run.

Hat seller on the Dala ferry.

Boarding the ferry at the last moment.