When we went to Europe last year, I joked that we were on the playground tour of Europe. But it is a great way to experience a country. You don’t necessarily meet locals that way (after all there is still a language barrier), but it is nice to be doing something the locals are actually doing.

My favourite example of this wasn’t the best playground, but it felt like the most local experience. We stopped in Strasbourg for a night, to break the journey between Switzerland and Paris. Not too far from where we stayed was a nicely put together playground (near the Pont Couvert in Petite France). 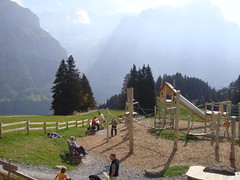 The most parent friendly playgrounds were in Switzerland, where most playgrounds had an associated cafe, with a complete view of the playground at all times. This particular cafe even served beer, as well as the hot chocolate we had all been hanging out for. 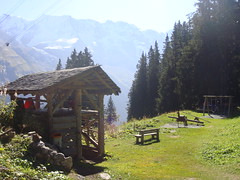 Not every playground had a great cafe. This one in Murren didn’t. But the point blank view of the alps across the valley made up for it in scenic georgeousness. We adults were happy to while away a lazy half hour watching the boys play in the cubby house, and various other walkers come up and down the mountain. We knew that there was a cafe waiting for us 10 minutes walk away, so we could probably manage without a coffee for a little while.

Many playgrounds are fairly generic – playground equipment from a factory that could be anywhere in the world. But my favourite spot wasn’t even officially a playground, even though we spent a very happy couple of hours there. The Jardin de Luxembourg, in the middle of Paris, has a lovely octagonal pond. You can hire wooden sailboats there, which have masts that move with the wind. You also get a stick, which is fairly useless. So then you spend as long as your hire lasts chasing your boat around the pond, exclaiming when it crashes into other boats, having races with your brother, and generally exhausting yourself. It was enough fun that I was chasing as well, and a scene that just seemed to fit all my fantasies about what it would be like, living in Paris. 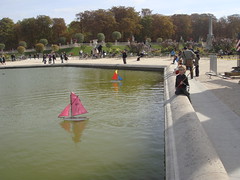 So I highly recommend the playground method of tourism. Even in the most beautiful and touristy parts of town, it feels as if you are a small part of the local fabric. At that Alpine playground in Switzerland, Callum and Declan carefully diverted the course of the stream through one corner of the playground, together with three or four other children. I don’t believe they had a common language between them, but they had a wonderful time moving stones and mud together.