Stirling Castle was the proud seat of Scottish Kings for generations. When James V married a French noblewoman he renovated the castle to make a palace fit to show off the Scots’ formidable position in the modern world. Lovely carvings, statues dripping with symbolism – all within a defensive structure that reflected Stirling’s central position in the continuing battle between England and Scotland.

The Castle makes for a great visit. Newly opened rooms provide a clear and evocative description of life in the 16th Century. When we visited today there were actors wandering about bringing various aspects of life to, well… life. The boys got to learn how to be jesters and also how to be knights. Strangely enough they were the only children who volunteered to help out with the jestering and two of a crowd of twenty who volunteered for knighting.  Says something about the relative position of the two roles I think.

Stirling’s defences are interesting. For many years Stirling changed hands between the Scots and the English. It was both practically and symbolically the pivot point in the continuing struggle for Scottish independence. James V made it the centre of a Scottish renaissance; making it clear that Scotland was an equal, at least in its own mind, with the major European players of the time.

The sad thing is that the later additions to the Castle were to point guns at the surrounding town. They were designed to hold back the Jacobites rising from the town and taking the castle. So from symbol of freedom it moved in a relatively short time to be the heavy hand of oppression. 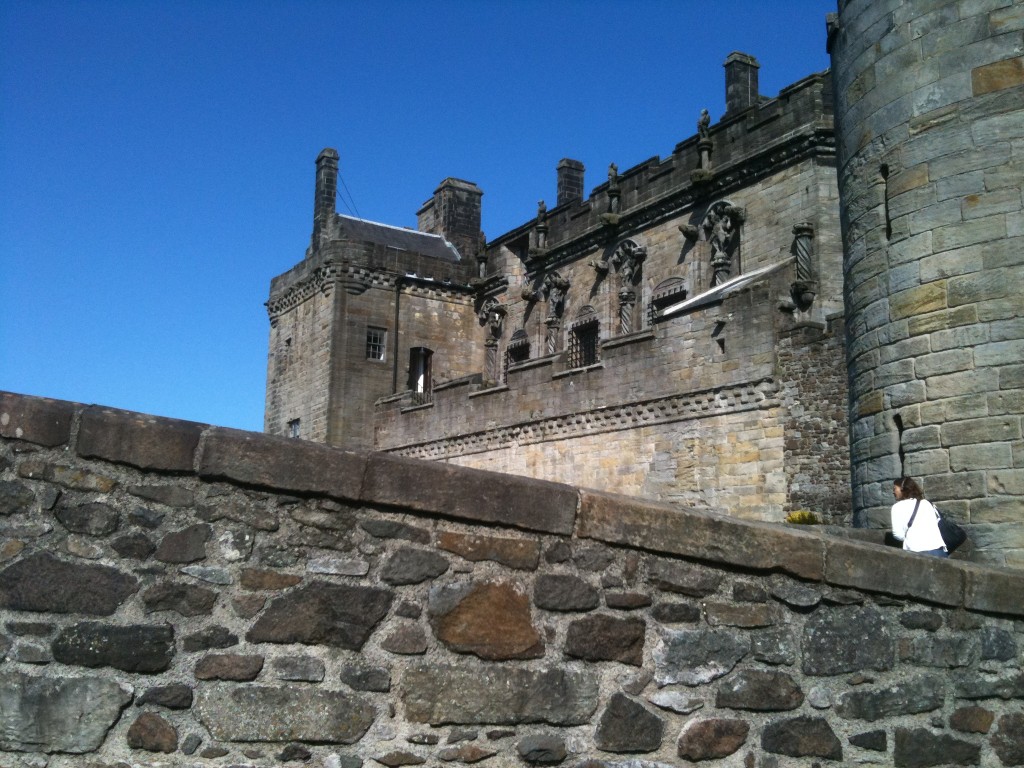 We had a great time at Stirling Castle and have decided it’s in the top four castles we’ve visited in the last seven months.

In the later afternoon we ventured down into the town to do some more shopping. There were two things on our shopping list. First was a casualty of constant travel. Last week we bought boots in Windermere. During our walk yesterday it became clear that I’d made a mistake; my boots were slipping and hurting me. So I bit the bullet and got some more today, rather through gritted teeth.

The second item on our shopping list did not involve any gritting of teeth – it was tablet. Tablet is a peculiarly Scottish item. Take lots of sugar, butter and condensed milk and heat them until they congeal. Cool to form a hard, frangible block. This is tablet; and it is ambrosia. We all agree it is the perfect item for long walks. Well, truth be told, it’s perfect anytime but only a  long walk justifies that sort of sugar infusion.

2 thoughts on “Stirling Castle and tablet”