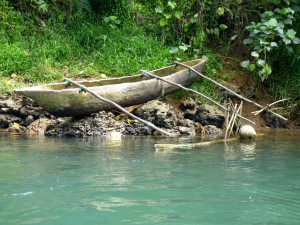 We saw a traditional dugout canoe, but we were in nice modern Kayaks for our morning spent on a lovely river in the South West of the island. Our guides were Bosco and Fred, the latter of whom was a Pentecost Island land diver who had most recently jumped off the 60m-high platform. They were both wonderfully laid back and informative, and very patient with the kids splashing each other all the time.

We first paddled upstream past a local village with people washing themselves in the river. Vanuatu is even more poor than Burma, although it seems like the people are better off as they can still effectively live from the land. We saw some locals fishing and within a couple of minutes of tossing in a net they were pulling it out full of fish.

Back downstream we paddled into a tributary and found why the river system still flows strongly in spite of the fact there has been no rain to speak of since Cyclone Pam last year. At the end of the tributary, the water flowed out from a natural underground stream, and such streams are where most of Vanuatu’s water comes from.

On the main river, we paddled further downstream past mangroves. Declan was having it easy as he was sharing a kayak with Bosco but Callum had to dig a bit deeper in his single kayak. The mangroves were alive with little crabs and we challenged the boys to pick one up. The crabs proved to be quick movers but both managed to grab one in the end.

As we paddled further down, the river widened and we began to hear the sound of surf; until we came to the point that we could see the line of breakers up ahead. There were herons flying around there and we saw a couple of lovely kingfishers.

That left the schlep back up-river. Callum’s digging had to get deeper still but he handled it beautifully and eventually we pulled back in to our starting point to a snack of fresh fruit from the local market.

Then there was the Tarzan swing to cool us all down.

The crab hunters sinking in mud.